Medicare negotiation could reduce manufacturer revenues by US$165 billion 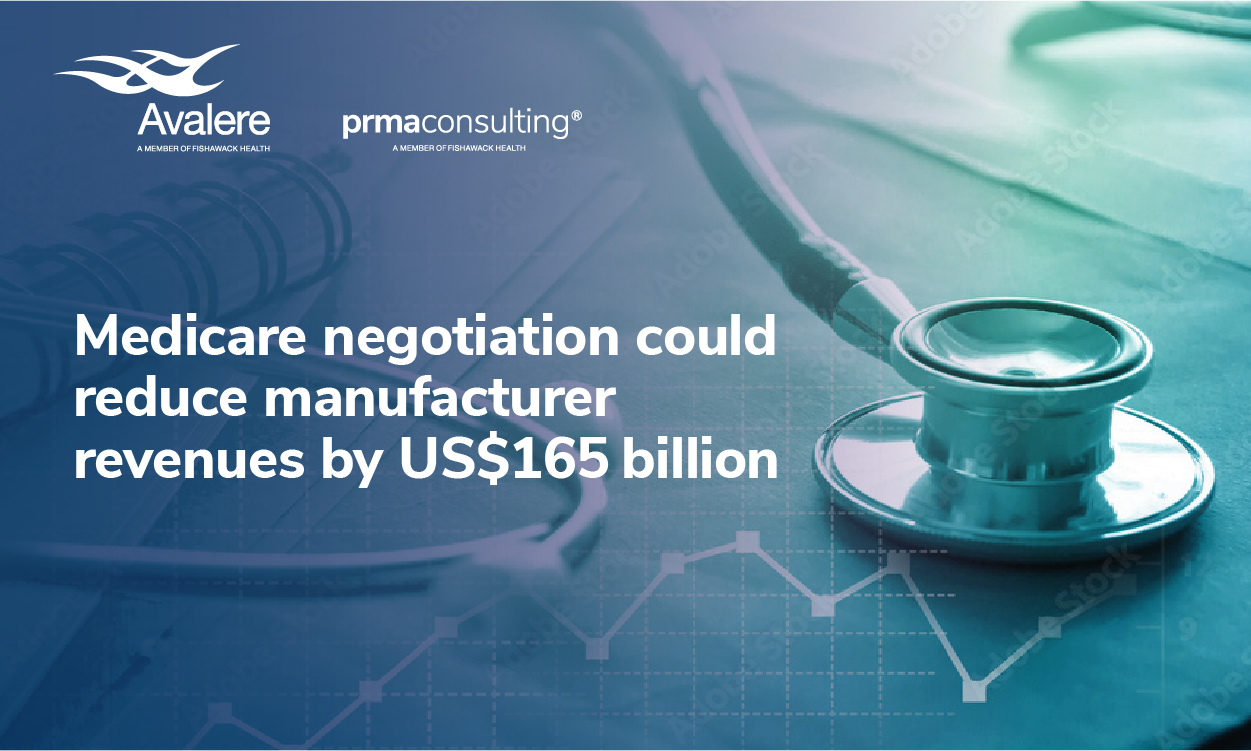 Analysis of updated Senate drug pricing legislation shows Medicare negotiation could reduce manufacturer revenues by US$165 billion in Part D and US$290 billion in Part B from 2026 to 2032 – an update from Avalere, a member of Fishawack Health.

On 6 July 2022, the Senate Finance Committee released its updated draft of the drug pricing provisions in the reconciliation package, which included amendments to its December 2021 and House-passed versions of the bill. The updated Senate drug pricing legislation would, among other provisions, allow the Secretary of Health and Human Services to negotiate drug prices (as defined by the legislative text) with manufacturers of certain single-source Medicare Part B and Part D small molecule drugs that have been approved for at least 7 years, and biologics that have been approved for at least 11 years (with some additional exclusions).

Negotiated prices for selected drugs would be implemented after 9 and 13 years, respectively. As defined by the amended legislation, Medicare negotiation would include selected drugs in Medicare Part D beginning in 2026 and expand to include Part B drugs in 2028.

The Secretary would have the authority to negotiate a price for each product as outlined in the legislation. The legislation defines the “ceiling” for the MFP based on the non-federal average manufacturer price (non-fAMP) and the number of years since a drug’s Food and Drug Administration’s (FDA) approval: 40% of the non-fAMP for drugs approved for more than 16 years, 65% of the non-fAMP for drugs approved for 12–16 years, and 75% of the non-fAMP for small molecule drugs approved for 7–12 years (11–12 years for biologics). However, the Secretary could negotiate an MFP lower than the “ceiling” methodology outlined in the legislation. Given the uncertainty around negotiations, Avalere did not estimate an MFP lower than the ceiling price.

Discounts provided through the MFP would be included in Best Price calculations and could potentially establish a drug’s Best Price, depending on rebates currently available in applicable markets. As a result, the MFP may have the potential to impact Medicaid rebates and 340B ceiling prices. For 340B covered entities, manufacturers would not be required to offer the negotiated MFP if the 340B ceiling price is lower than the MFP. Given the proprietary nature of Best Price and 340B discounts, Avalere did not estimate this impact.

The legislation includes penalties for manufacturers that do not comply with various sections of the legislation. Manufacturers that do not offer a price equal to or less than the MFP would be subject to a civil monetary penalty (CMP) of 10 times the difference between the offered price and the MFP for all applicable units. Manufacturers would also be subject to an excise tax during the non-compliance period prior to submission of relevant information to the Secretary or reaching an agreement to establish the MFP.

The analysis identifies drugs that are likely to be selected and estimates the potential impact of the Medicare negotiation proposal under the updated Senate drug pricing legislation for two scenarios, to create upper and lower bounds of total financial impact on manufacturers.

The scenarios modeled include:

To further illustrate the cost for non-compliance, Avalere estimated the impact of the excise tax based on the parameter that manufacturers of selected drugs did not come to an agreement with or submit information to the Secretary, and would therefore be subject to the applicable excise tax for the full length of the non-compliance period.

Under each scenario, the market is likely to experience a range of stakeholder responses that would be manufacturer- and drug-specific. Given the uncertainty associated with these potential responses, the analysis did not consider manufacturer, plan, or provider behavioral responses that could impact the estimates, such as changes to formularies, provider prescribing, the price of drugs not subject to negotiation, and the possibility of duplicate discounts. Expected growth in price and volume was based on historical trends observed in the data.

Under the lower bound scenario, net manufacturer revenue over the 2026–2032 budget window would decrease by US$455 billion, including an estimated reduction of US$165 billion in Part D and US$290 billion in Part B. The manufacturer impacts of the lower reimbursement in Part B would be greater, in part, because these price reductions would contribute to average sales price erosion, which would decrease reimbursement from commercial payers. The realized impact may be higher than estimated due to the effect that the MFP will have on Medicaid rebates and 340B ceiling prices paid in the commercial market but not reflected in this analysis.

The upper bound scenario could be as high as US$3.5 trillion in Part D and about US$1.6 trillion in Part B if all manufacturers opt not to negotiate, reflecting a magnitude of nearly 300% and 400% of total Part D and Part B drug spend, respectively, over the 2026–2032 budget window. Furthermore, Avalere’s analysis of the excise tax found that the estimated impact of manufacturers’ non-compliance could be as high as 1,450% of total Part D spend and about 2,500% of Part B spend. Given the legislative approach for non-compliance, it is unlikely that these “worst-case” scenarios will materialize. However, the government’s significant leverage suggests that prices could potentially be less than the MFP ceiling price established in the legislation. In addition, the impact of negotiation could result in a reduced number of drugs that are introduced in the future as recognized by recent Congressional Budget Office (CBO) reports.

Table 1. Estimated manufacturer impact from Medicare negotiation and penalty, in billions of US dollars, FY 2026–2032

Funding for this research was provided by Gilead. Avalere retained full editorial control.

To learn more about drug pricing, connect with Avalere.

Avalere modeling estimated the federal budgetary and industry impacts of the scenarios over the FY 2026–2032 budget window, using the May 2022 baselines from the CBO and June 2022 Medicare Trustees Report and the revised Senate draft language. Estimates of the impacts include federal spending and industry revenues from the Medicare program (including Part D and Part B drug spending).

The analysis combined Centers for Medicare and Medicaid Services (CMS) dashboard data, commercial drug data, and FDA information at the product level to identify drugs that would be eligible for selection in future Medicare drug price negotiation and to determine single-source status. Avalere used CMS drug dashboards to identify top drugs by Part D and Part B spending in 2020. Medispan was used to determine single-source and multi-source drugs. Drugs@FDA, the FDA Purple Book, the FDA Orange Book, and other publicly available FDA resources were used to identify:

“Single-source” was defined as a drug product that does not have generic competition or authorized generics marketed under the same new drug application as the originator product. Exclusions were made for certain orphan drugs, drugs with low (less than US$200 million) Medicare spend, plasma-derived products, and small biotech drugs. To align with the new language on delay inclusion for certain biologics, the analysis identified and excluded drugs that are likely to be subjected to this provision in the negotiation rankings.

To estimate the CMP and excise tax for Part D and Part B under the non-compliance period, Avalere used the formula set forth by the proposed legislation. Avalere assumed that manufacturers of the negotiated drugs would not participate in negotiation (i.e., they would maintain current pricing strategy) and thus be subject to the penalty. In addition, Avalere assumed the penalty would not be reflected in reduced drug prices, and therefore beneficiaries would not see a reduction in out-of-pocket costs.

Avalere’s analysis used scoring assumptions generally consistent with CBO scoring, such as baseline federal program spending and the relationship between drug utilization and medical costs. Given uncertainty, Avalere did not incorporate other stakeholder (e.g., manufacturers, plans, provider) behaviors in response to the proposed MFP. Avalere also did not include any interactions with other policies such as Part B and Part D inflation rebate or Part D redesign and beneficiary out-of-pocket smoothing.

Avalere is a member of Fishawack Health’s Policy, Access, Value, and Evidence capability. Together with our colleagues in PAI, PRMA Consulting, and Skysis, we provide a best-in-class integrated offering from early pipeline to patient access.

Navigating the US payer landscape and the evolving influence of ICER 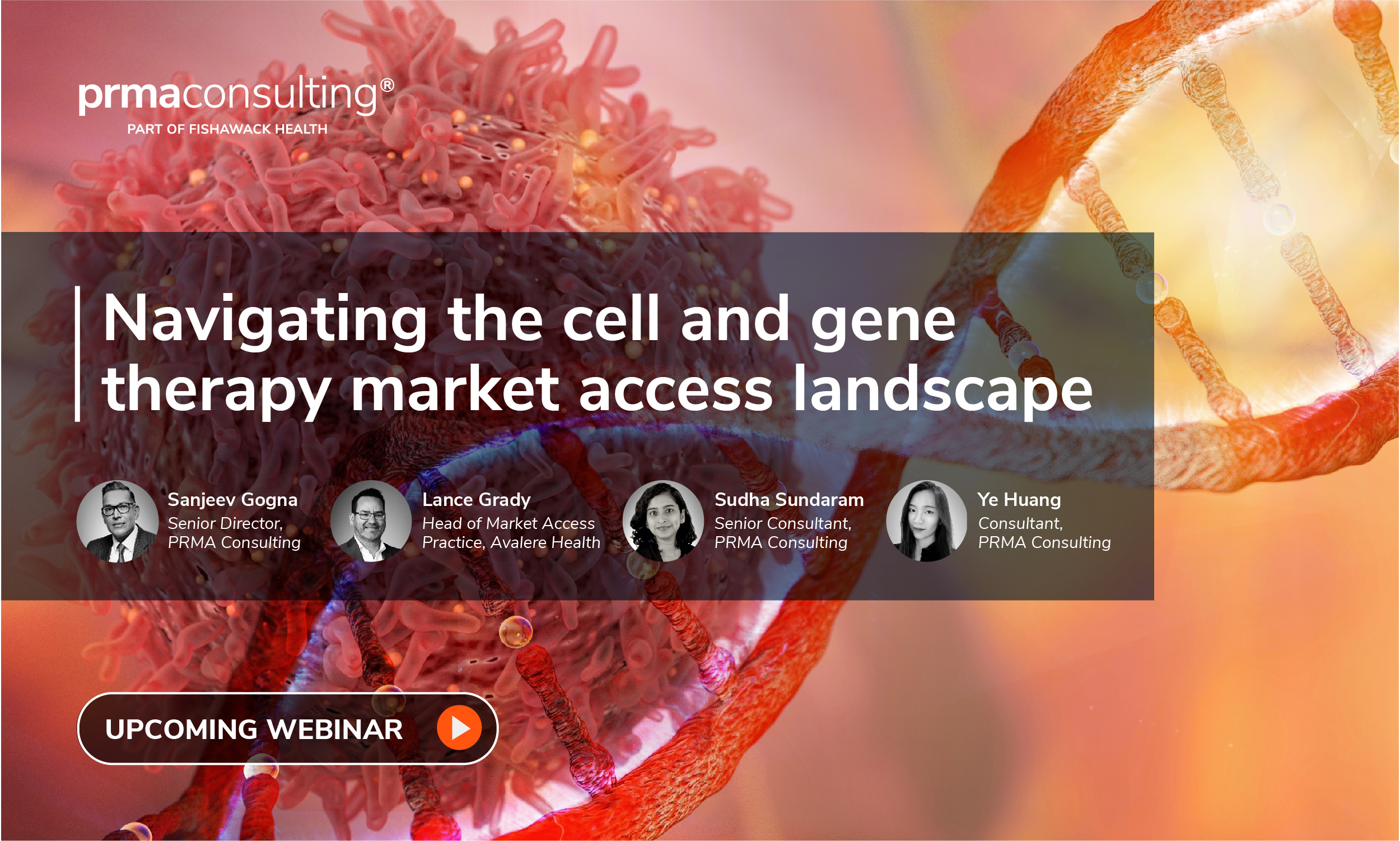 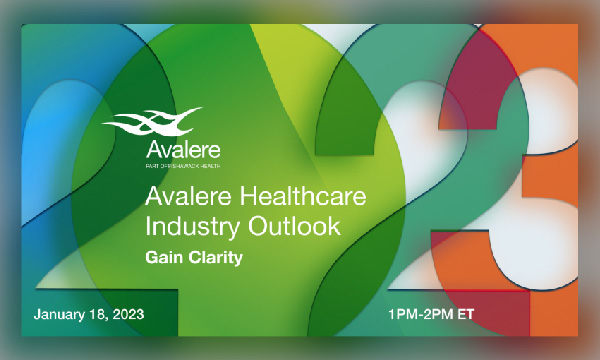 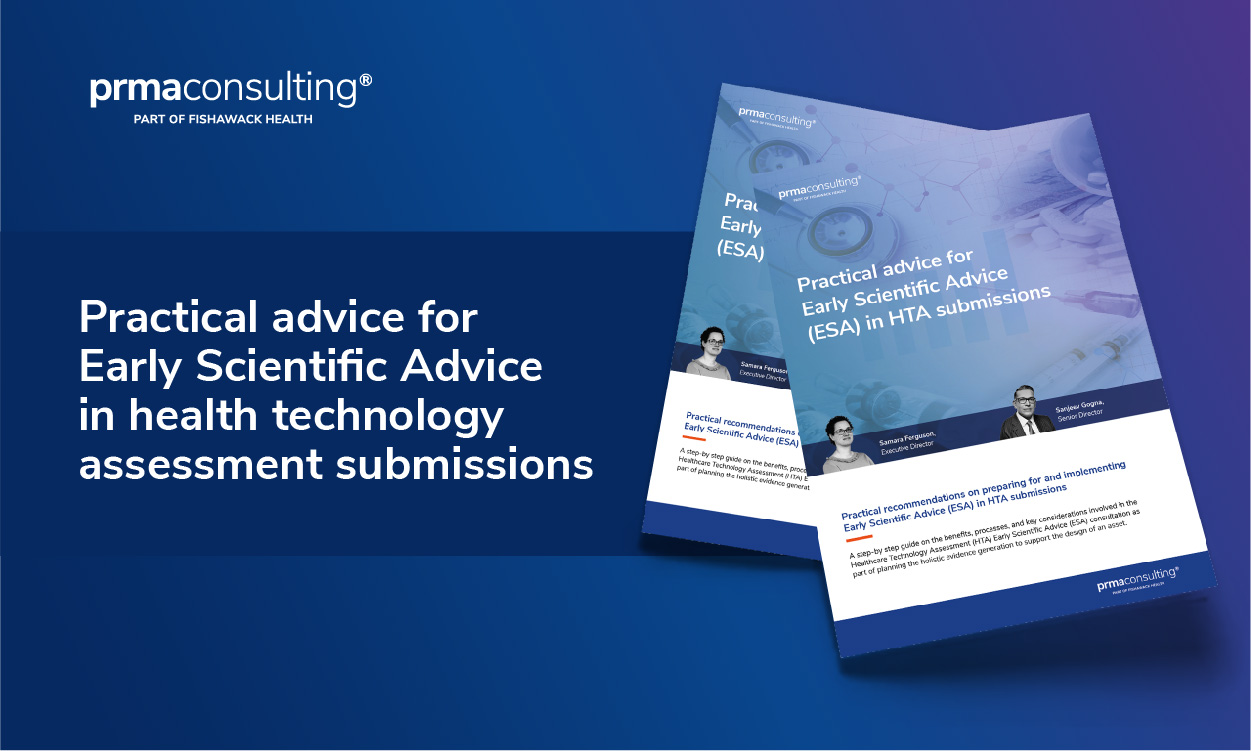 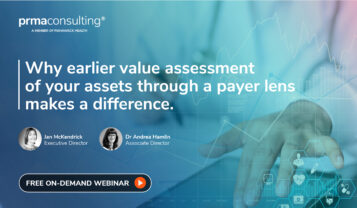 Increase your influence in early pipeline ... 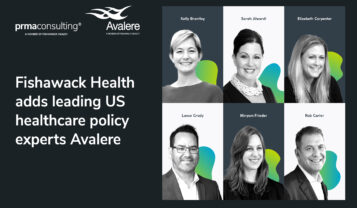 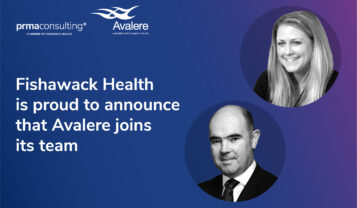 Fishawack Health is proud to announce ... 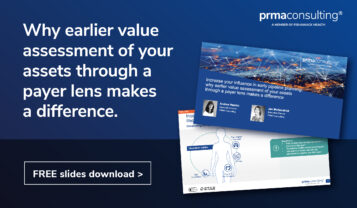 Why earlier value assessment of your ... 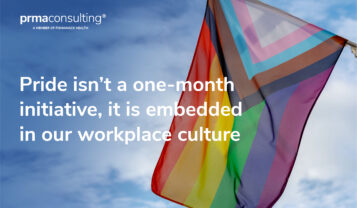 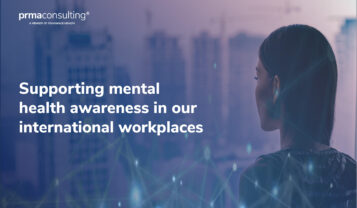 Supporting mental health awareness in our ... 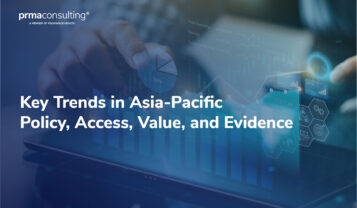 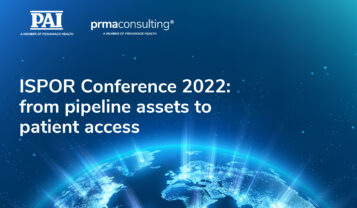 ISPOR Conference 2022: from pipeline assets to ... 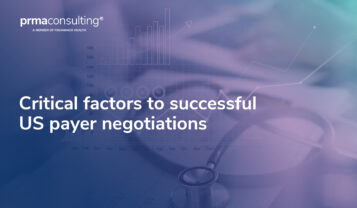 Critical factors to successful US payer ... 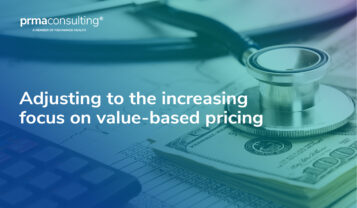 Adjusting to the increasing focus on ... 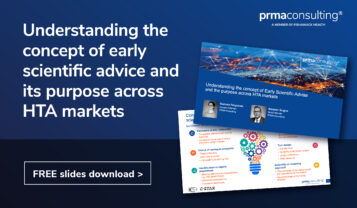 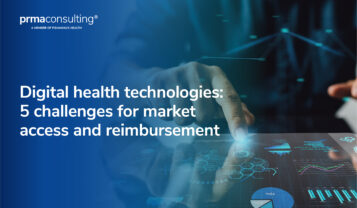 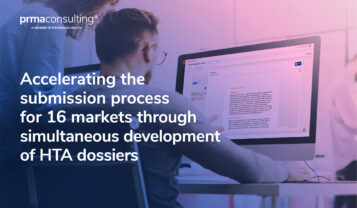 Accelerating the submission process for 16 markets ... 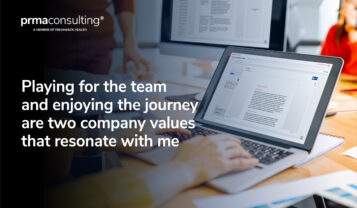 Playing for the team and enjoying ... 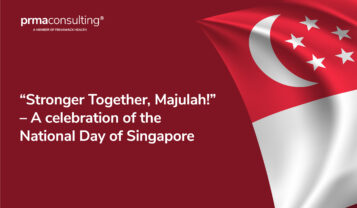 “Stronger Together, Majulah!” – A celebration of ... 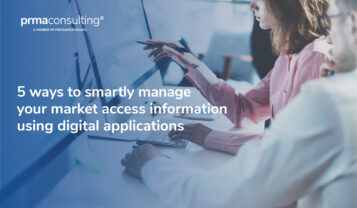 5 ways to smartly manage your market ... 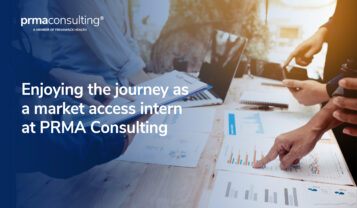 Enjoying the journey as a market ... 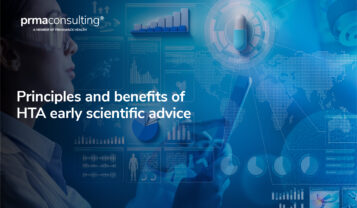 Principles and benefits of HTA early ... 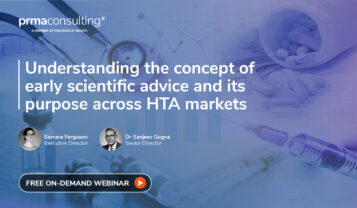